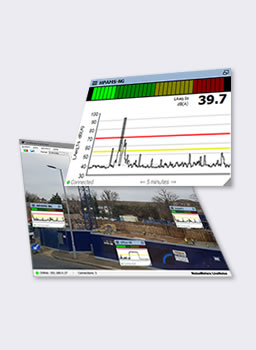 The Supervisor software runs on a computer on your network. It receives real-time noise levels from each noise monitor, which it displays on a coded bar graph (green, yellow, red) and on a graph. You can see some example displays on the Screenshots page.

As noise measurements are usually location based, you can add an image to the background. This could be a floor-plan for a factory, aerial photograph of a construction site, or a photograph of an open plan office. The noise monitor windows can be positioned on the background, giving a clear view of where the noise levels are problematic.

The LiveNoise Supervisor software is highly configurable, so these are just examples of what is possible.

The background can be left blank, or you can select an image, such as a factory plan or photograph of the site. The windows showing the noise levels can be sized and positioned as needed.

Each noise monitor has its own window in the software. The window can be set to show just the name, turning red when an alarm occurs, it can show the green/yellow/red bar graph, or it can show a time history chart.

As the software is very efficient, it will run adequately on an entry level Windows PC. For systems with a large number of noise monitors a higher power computer will provide a better display of real-time noise measurements.

The software does not need a dedicated computer, it will happily run on an existing machine that is running other software. It can be minimized to the system tray and set to only alert you if there is a high noise level alarm.

To communicate with the noise monitors the computer running the Supervisor software must be connected to the same network. It is possible to connect to noise monitors on other networks or elsewhere on the Internet, but this will require additional work for routing and firewall rules.

As the software communicates directly with the noise monitors and accesses the Internet for registration and update checks, you may have to update some firewall rules. On smaller (less managed) networks, this just means allowing the software to have Internet access when prompted by the Windows Firewall. This happens the first time you run the software. For more managed and secure networks the IT Manager will have to make these allowances.

Details of the ports used are included in the user manual.

Isolated from the Internet?

The LiveNoise system with Supervisor software can run on a network that is completely isolated from the Internet. Software updates and remote support will not be available, but for systems with high levels of security this is a small price to pay.